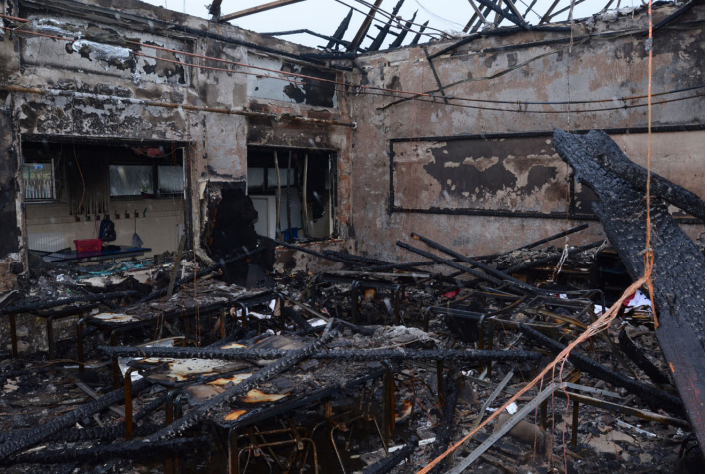 Today Aaron Foster, aged 20, of Stanningley Drive in Mixenden, was sentenced at Bradford Crown Court for starting separate blazes at Ash Green Primary School earlier this year and at Mixenden Library in August 2020.

The fire at the Clough Lane school on the evening of February 1 this year caused £4.5m of damage and at its height up to 60 firefighters were on site tackling the inferno, which engulfed the upper site of the school and could be seen right across the Calderdale village.

Headteacher Mungo Sheppard said the support from West Yorkshire Fire and Rescue Service (WYFRS) was incredible. “The support during the incident and afterwards has been amazing," he said. "They are all absolute heroes to us. That night they saved the rest of the school and their post-incident care has been phenomenal, with a close relationship being built between the service and this community.

“For example, when we told the fire service that the children were learning about the Great Fire of London, they came down with the fire engine and spoke to pupils.Firefighters had a charity car wash to help raise money towards the rebuilding of the school.

"When they presented the money to us, the children gave them thank you cards - everyone on this estate knows about the crews’ heroic actions and how important the fire service is to us.”

Mr Sheppard said that the rebuild from the fire is still taking place and is not expected to be finished until Spring 2024. “After the fire we had children learning in cramped or makeshift classrooms, and at the same time pupils and teachers were dealing with the trauma of the situation," he said. “Some of the children were upset for quite a while afterwards, wondering when the next bad thing was going to happen. It was an upsetting time for the whole community, but everyone has pulled together and they have all been incredible.”

He added it took months to demolish the upper site of the school and it is thought it will be another 18 months before the children are in permanent classrooms.

Calderdale District Commander Laura Boocock was at the scene of the school fire, working with the crews to bring the raging fire under control. She said: “This individual’s reckless actions have affected hundreds of people and will continue to do so for a long time.

“Ash Green Primary is on a hill and very much at the centre of this tight community, so it’s not surprising that on the night of the fire there were crowds of concerned residents wondering who could do such a horrific thing to their school. The headteacher is a big part of the local community and it has been heart-warming to see the support the school has been given.

“We hope that this sentence shows that arson is a horrific crime which affects so many lives. We also hope it gives reassurance to the local community, which has worked hard to start rebuilding the damage created by the criminal actions of one individual.”

Detective Constable Louise Halliwell, of Calderdale CID, added: “I am pleased with the sentence handed to Foster for the multiple offences committed. His actions resulted in £4.5m of damage caused to the school and had a huge impact on those in the community.

“Through the investigation into the arson at Ash Green Primary, we were able to gain evidence which put Foster in the spotlight for the previous offence back in 2020. The community has come together and proved how resilient it can be when faced with incident like this and I’m glad we can provide the justice deserved to those affected.”

In an emergency people should always dial 999. To make an anonymous report about someone starting a fire deliberately people can get in touch with Firestoppers on0800 169 5558 or go to www.firestoppersreport.co.uk

The 28-year-old has recieved a custodial sentence.