The Localism Act 2011 repealed the mandatory requirement to maintain a Standards Committee with effect from 1st July 2012. The Act introduced a new procedure for dealing with the investigation of complaints against Members of the Authority and one requirement of that procedure was that an Independent Person be appointed.

The Authority’s Code of Conduct complaints procedure includes provision for the Independent Person to be consulted only when the Complaints Sub-committee has decided to investigate a complaint and before a final decision has been taken on any allegation of misconduct. The Independent Person does not enter into any communication with a complainant and will not be consulted should the Authority’s Monitoring Officer decide at the initial sift process that the matter does not fall within the Code of Conduct.

The Independent Person is Mr Michael Wilkinson who was originally appointed 30 June 2012 and reappointed on 1 July 2017 to a further term of office which will expire on 30 June 2022. 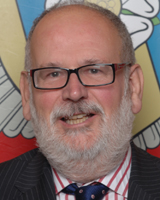 Find out about our member champions and their role at WYFRS.
Find out more

Information about the corporate status of West Yorkshire Fire and Rescue Authority and its responsibilities.
Find out more