A chilling tape of a teenager calling 999 to claim someone else had set fire to a Calderdale primary school he had just torched has been released. 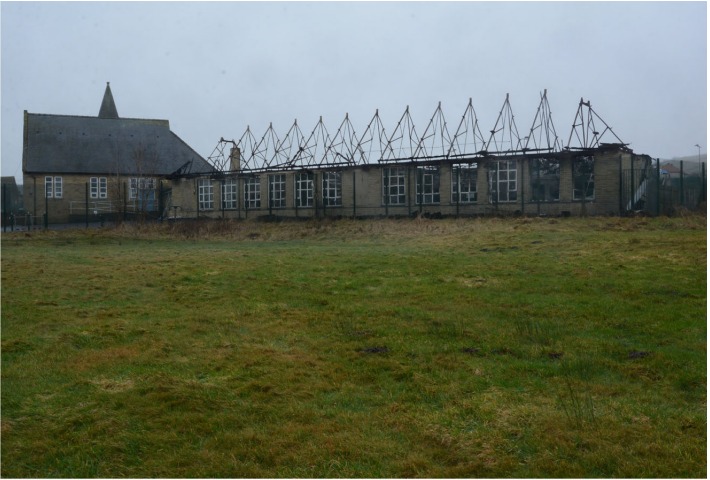 In the audio Aaron Foster, then aged 19, can be heard making the call to West Yorkshire Fire and Rescue Service blaming non-existent accomplices, to avoid suspicion falling on himself.

Foster, of Stanningley Road, Mixenden, who had denied the charges but was later found guilty, was yesterday given a life sentence for deliberately starting a fire at Ash Green primary school in February this year and another at Mixenden library in August 2020. Damages to the school were over £4.5m and around £180k at the library.

After getting trapped by the flames he had deliberately lit, Foster then calls 999 in a panic.

During the call Foster is heard telling the control room operator he’d just come out of prison and his mates had suggested stealing iPads to get some money, but then ditched him after they set fire to the school.

Foster, who is now 20, also admits on the call to breaking into the school after smashing a window. He is given advice to cover his mouth with a jacket and stay calm and get close to the floor. Guided by the operator he was eventually able to get to an area of the school away from the flames and was then assisted to safety by fire crews.

Foster had been captured on CCTV walking around the school using the torch function on his mobile phone and carrying a lit cigarette.

The fire investigation that followed the incident indicated that there had been three or four seats of fire. The footage showed Foster going into classrooms in the Key Stage Two area and captured the moment the first fire was started.

His sentencing comes on the same week another man was given 14-and-a-half years extended licence after setting a car on fire, which quickly spread to a family home, trapping a woman and two children inside, fearing for their lives.

Luke Patchett, aged 33, of Bolton Hall Road, Wrose, Shipley, will spend the next seven years behind bars and seven more on licence for setting the car ablaze in Clapham Street, Denholme, in the early hours of June 13 this year after going on a drink-fuelled arson and burglary spree.

Fire chiefs have welcomed both the verdicts which they said sent a strong and clear message that arson is a very serious crime, which endangers life.

Deputy Chief Fire Officer Dave Walton said: “Both these cases highlight the complete reckless behaviour of two individuals, with no thought as to whether their actions were endangering lives.

“There were people trapped inside the house in Denholme including children. It is lucky we were able to get to the scene in time to rescue them or this could have been a very different story.

“Similarly the arsonist trapped in the school by his own criminal antics, put not only his own life in danger but also our crews lives were unnecessarily endangered having to rescue him.

“And to then ring up our control staff after getting himself trapped and blaming others for setting the fire is beyond belief.

“Arson is the deliberate act of setting fire to property and is extremely dangerous, as these two cases show. Those who commit such callous acts are a danger to society and the sentencings this week reflect that.”