Prince the horse is rescued by firefighters in dramatic excavation mission

A dramatic rescue mission saw firefighters help Prince the horse, who had become trapped in a sink hole in his favourite field in Mirfield, West Yorkshire. 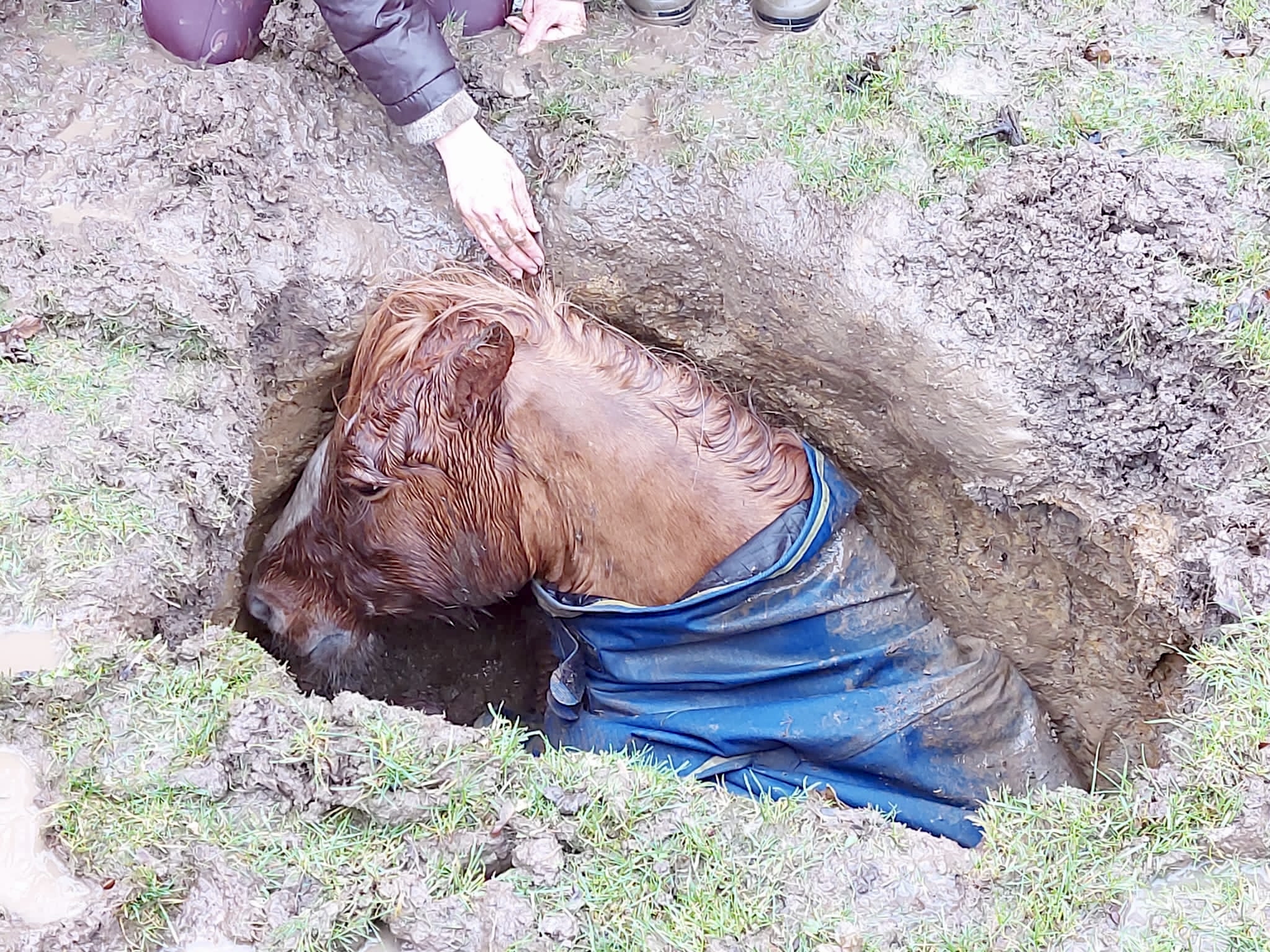 The 27-year-old horse had been enjoying a Saturday morning walk in the field at Calder Farm Equestrian when he disappeared from view at around 10.30am. He was discovered below ground level, trapped in a sink hole, and immediately West Yorkshire Fire and Rescue Service (WYFRS) were called.

The Technical Rescue Team from WYFRS worked with a vet and put a head collar on the horse, covered his eyes and put cotton wool in his ears to help him keep calm. Prince was then sedated as an excavator from a nearby business was used to create an escape route out of the sink hole.

Technical rescue officer and station manager Damian Cameron said when they arrived Prince was quite calm. “He had been let out of the stable as usual, into the field, and then the stable hand noticed the horse couldn’t be seen,” he said.

“A sink hole can be caused by a number of things, from old mines to running water. We’ve had similar incidents in the past where cows have got stuck in sink holes and we do have the option of putting slings around them and lifting them out. However, we felt this could be dangerous for Prince and so we opted to dig him out instead.”

Nearby business Chappelow Sports Turf offered up an excavator for the job which involved following the sloping gradient of the field to give Prince a route out of the hole.

“Once Prince was had been sedated, we started to work on getting him out and back to the surface,” said SM Cameron. “By that point his legs were a bit numb and he still had a bit of climbing to do, but he managed to get out fairly quickly – the whole rescue took less than an hour.

“A number of years ago we carried out a rescue in the adjacent woodland when a horse had become stuck in a ditch, so the centre knew that calling the fire service was the best thing to do. Prince was checked and thankfully recovered from his ordeal with no injuries - we were thrilled to be able to reunite Prince with his owner.”

Prince’s owner, Helen Tempest, said the crew from WYFRS had worked quickly and calmly under pressure. “Prince was my first pony and he is the most relaxed horse I’ve ever dealt with,” said Helen, who lives in Wyke and works in logistics in Huddersfield.

“Because of his age we just ride him once a week, he is so calm and has never got in trouble before. We couldn’t believe it when he got stuck in the sink hole, it was in the middle of a field he goes into every day and there have never been any problems.

“The fire crews were absolutely amazing. I had no idea what to do and the crew came and took control, worked quickly and efficiently and were so good with Prince. I really can’t thank them enough. Prince has come out of it totally fine and is out on a different field today.”

A show-bred cocker spaniel was rescued from the icy grasp of a frozen fishing lake in Wakefield, thanks to his quick-thinking furry daughter raising the alarm.

Leeds woman rescued with her dog after 30ft plunge into river

A dog owner, who plunged thirty foot into the River Wharfe while searching for her pet, has been saved by fire and rescue crews.

Firefighters have been hailed as “heroes” after saving a new-born puppy from a house fire in Halifax.

People that have bought e-bikes and e-scooters as Christmas gifts are being warned of the dangers following a number of fires across the UK and in West Yorkshire.