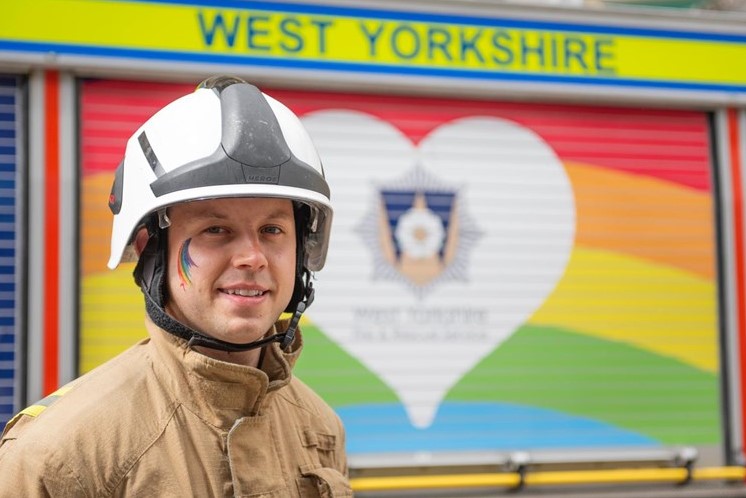 West Yorkshire Fire and Rescue Service (WYFRS) station manager Ant Devine will be raising money for the NSPCC when he runs in Sunday’s London Marathon. Training for the 26-mile challenge has taken him 20 weeks and he is hoping to raise £2,200 for charity.

Ant is the programme advisor overseeing the WYFRS Birkenshaw redevelopment programme which will see the construction of a new modern energy-efficient three-storey headquarters and training facility for the service. In 2020 he adopted his three-year-old son with husband Dean and said he wants to give other young children the chance of a good start.

“My son had a good start because he was fostered from birth and then came to us when he was 15 months old,” said Ant, who has worked at WYFRS for 14 years. “Not every child has the best possible start and that’s why I chose to raise money for the NSPCC.

“There are many reasons why a child may need to find their forever family outside of their birth family. However, it can't be denied that the main reason for this is neglect, or the risk of the child being neglected.”

According to figures the NSPCC has already helped make 6.6 million children safer from abuse. Ant says that without the support from fundraising this wouldn't have been possible, with 90 per cent of the charity’s funding coming from supporters.

“Everything the NSPCC does protects children today and prevents abuse tomorrow,” said Ant, who is almost halfway towards raising his goal of £2,200. “Every pound and penny make a difference. I was lucky enough to get awarded a marathon place with the charity and they have supported me through all the training.”

If you wish to donate, you can do so through Ant's Just Giving page here.

West Yorkshire Fire and Rescue Authority has today given the go ahead to relocate the fire station in Hightown Road, Cleckheaton, to WYFRS Headquarters in Birkenshaw.

In International Control Room Week, our Crew Manager shares why she's proud to work at WYFRS.