Firefighters are continuing to investigate the possible cause of a fire which ripped through a derelict building in Leeds city centre last night. 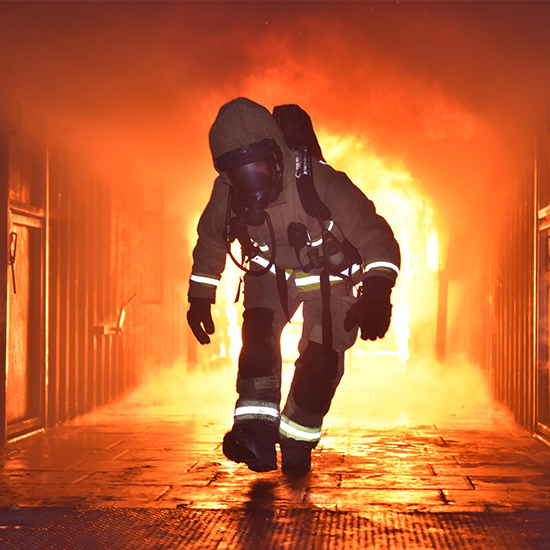 Firefighters are today investigating the possible cause of a fire which ripped through a derelict building in Leeds city centre last night. Fire crews from across West Yorkshire were on site within minutes after the blaze rapidly took hold of the vacant Leonardo Building.

The fire began just before 8pm on Saturday evening, with flames seen coming out the top of the multi-storey building on Cookridge Street, near Millennium Square and Leeds General Infirmary.  Local pubs and bars were evacuated as crews from across West Yorkshire Fire and Rescue Service (WYFRS) worked together to tackle the blaze.

It is believed the fire started in a section near the top of the building, and quickly took hold on the top three floors. The building is currently being renovated, with the fire taking hold of plastic wrapping and scaffolding surrounding the site.

Incident Commander Dale Gardiner, the senior fire officer who co-ordinated the big operation last night, said: “Due to the number of calls, the initial incident commander had 10 engines on scene to deal with the fire, which meant it could be contained to the top three floors.

“It was dealt with quite quickly and crews worked fantastically hard to stop it spreading further or going into other nearby buildings.

“The initial incident commander did an excellent job in evacuating buildings around it, alleviating any risk and giving time to gets appliances in place. Once the fire was out, we were able to eventually let people back into those evacuated buildings and scale back our operation.

“The fire itself was in the wrap surrounding the building. It was the scaffolding which had caught fire, which made it difficult for crews to put out.

“We had special appliances on scene including aerial ladders, with crews well trained to stop the fire from the outside. This then allowed us to put firefighters inside the building, creating a pinch point by stopping fire outside and inside at same time.

“It is difficult to say as yet what the extent of damage the fire has caused, but it looks like it was mainly contained to the outside. Fire investigators and building contractors were on site last night and continue to be on site today.”

No one was injured because of the fire, with those first on scene last night credited with getting the building fire quickly under control.

“The location of the fire and the proximity of other buildings and people all around, meant this could very easily develop into a serious situation,” added the Incident Commander. “It was about getting the right equipment and well-trained crews in place to ensure the fire was rapidly put out, without any further danger.

“From the initial snapshot of how quickly the fire had engulfed the top three floors, it was clear this had the potential to result in a major incident.  I can’t praise highly enough the fantastic work of initial crews on that incident, who can be credited with getting this under control as quickly and professionally as they did.”

Fire investigation officers have been back on site today and likely to have an initial outline of what potentially caused the fire in the coming days. He added: “As this investigation is on-going, we do not want to speculate what may or may not have caused it.”

Firefighters worked alongside West Yorkshire Police and the Yorkshire Ambulance Service as well as Yorkshire’s Hazardous Area Response Team (HART), who were on standby due to the instability of the derelict building.