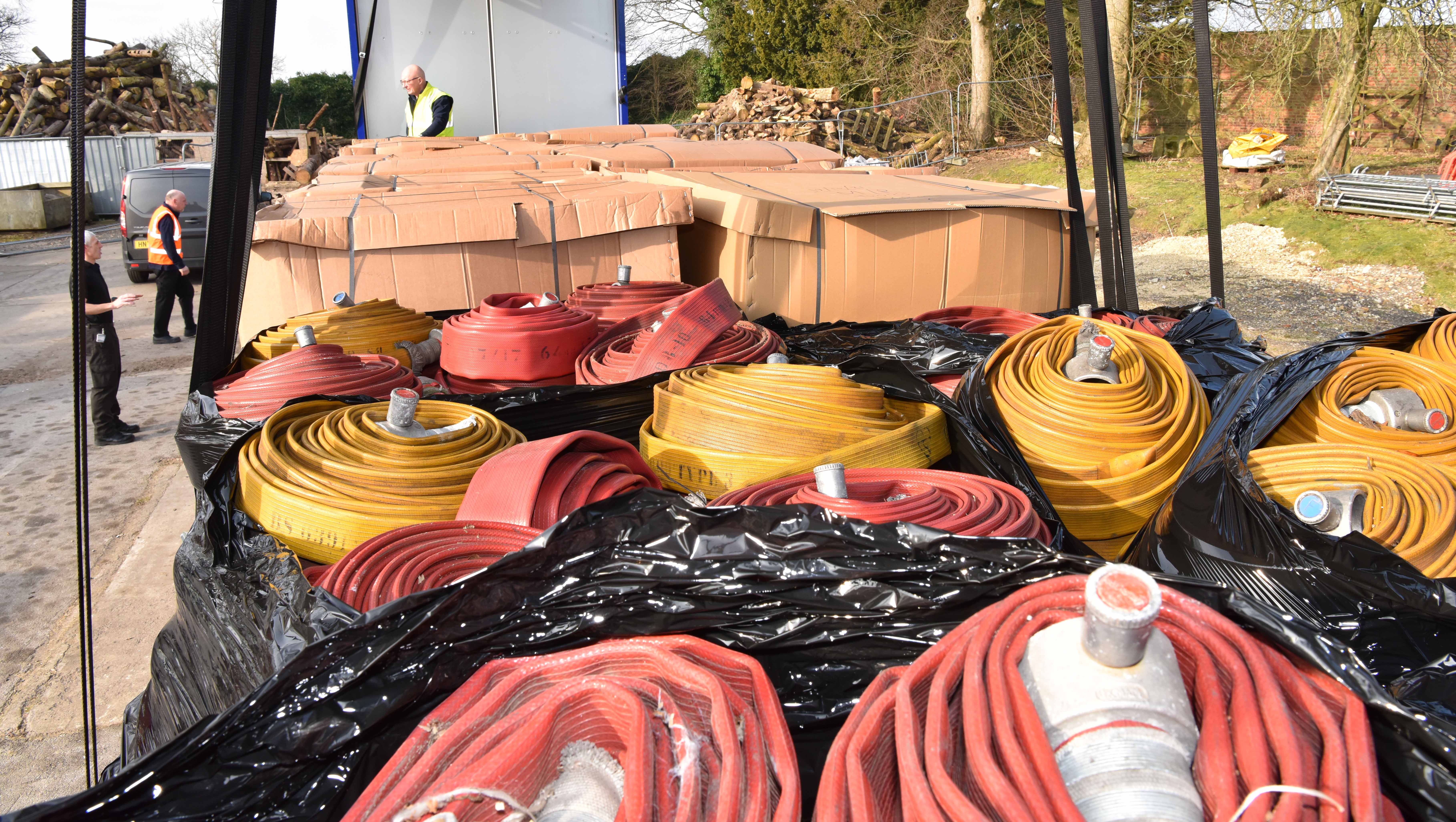 West Yorkshire Fire and Rescue Service is joining fire services across the UK in donating items of kit and equipment to Ukraine to support firefighters on the frontline. UK charity, FIRE AID and International Development (FIRE AID), and the National Fire Chiefs Council (NFCC) are coordinating donations of more than 5,000 items of fire and rescue equipment and PPE which will be sent in convoy to Ukraine.

Six inflatable boats will be sent at a later date.

“Over the last two weeks staff at West Yorkshire Fire and Rescue Service have been following the Ukraine situation and thinking about the people of Ukraine, and other parts of the world affected by war and conflict.

“We feel a particular bond and affinity with our fellow firefighters who are doing an already dangerous job in the most extraordinary of circumstances - and send good wishes for their safety. We stand shoulder to shoulder with them in spirit if not in body. Peace and safety is what we all wish for. Until that is achieved we will continue to hold them in our thoughts, and support them where we can.”

VIDEO tour of the equipment we're sending to Ukrainian firefighters

Dave Teggart, West Yorkshire Fire and Rescue Service Operations Manager gives us a tour of the kit we're sending to the Ukraine

Following a successful scoping visit to Poland conducted by FIRE AID volunteers this week, an initial convoy of three fire engines and a lorry of PPE and rescue equipment will depart the UK today (Friday 11th March), led by the Scottish Emergency Rescue Association (SERA).

FIRE AID is then coordinating a subsequent convoy consisting of 15 fire engines and two lorries of equipment, donated by fire services across the UK, which will depart on 19th March.

40 UK firefighters will join FIRE AID volunteers as part of the team driving the vehicles across Europe, where it will be received by the Polish State Fire Service and transferred to Ukraine.

Eighteen fire engines, thermal imaging cameras for finding victims, generators, lighting, hoses, rescue equipment, and thousands of sets of PPE are among the items being donated. Every fire service across the UK has stepped in to support these efforts.

The deployment of these donations is being supported by funding from the Home Office, Foreign, Commonwealth & Development Office, and the FIA Foundation, as well as through a public appeal via justgiving.com/campaign/KeepUkraineFireFightersSafe

When it reaches Ukraine, the equipment will be used to support firefighters, emergency services and volunteers who are battling together on the front line, often using old or worn equipment. They are dealing daily with fires and other emergencies to protect lives, people and property.

Claire Hoyland, Project Manager, FIRE AID commented: “FIRE AID and its members have over 25 years of experience responding to requests for aid and support for emergency services in over 50 countries. Following the invasion of Ukraine, our members immediately mobilised to gather equipment and aid to donate to their Ukrainian counterparts. FIRE AID members have been working in partnership with the Ukrainian emergency services since 2012 and we are proud to be coordinating this unprecedented emergency response on behalf of the UK Fire Sector.”

Home Secretary Priti Patel said: “The British Government and British people are standing shoulder to shoulder with Ukraine and its citizens during this barbaric invasion. I have been speaking regularly to my counterpart at Ukraine’s Interior Ministry and the Ukrainian Ambassador in London to understand what practical help we can offer. We are helping to ensure that crucial fire and rescue equipment and PPE donated will get to where it can directly provide succour to those brave firefighters, emergency services and volunteers on the front line in Ukraine.”

Chair of the National Fire Chiefs Council Mark Hardingham said: "As the terrible scenes unfold in Ukraine, the UK fire and rescue service is once again doing all it can to support those who urgently need help. The response has been incredible and it is testament to sectors combining resources, enthusiasm and skills in response to the crisis. Thousands of items have been donated to help the Ukrainian emergency services, battling together on the front line, as they strive to save lives and protect people and property. I cannot express how proud I am of everyone who has come together to support this. This is our sector at its very best - selflessly working together and supporting one other - ultimately helping and hoping to save lives."

The wider fire sector – including the MSA Safety, Fire Sector Federation (FSF), the Fire and Rescue Suppliers [FIRESA] Council and the Fire Industry Association (FIA) – are also key partners in supporting and making the deployment.