Filming for the new documentary has begun with cameras following firefighters to a range of emergencies across the region – look out for them in a street near you! 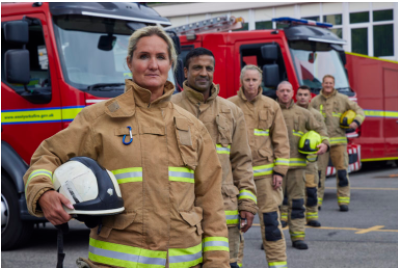 The new BBC documentary series will use the latest technology to bring viewers closer than ever to real emergencies and the men and women dealing with them.

The four-part documentary series has been commissioned by BBC England and BBC Two.

The programme will be made by Leeds-based independent production company Wise Owl Films and will show what it means to be a firefighter in 2020 and the challenges they face every day to keep people safe.

Showcasing the invaluable and life-saving work firefighters do at emergencies, the series will take viewers from the Control Room to the “front line”.  Firefighters will wear the latest helmet-mounted heat resistant cameras, giving viewers a glimpse of exactly what happens from the moment an emergency 999 call comes in.

Deputy Chief Fire Officer Dave Walton said: “We are really excited to be part of this project and we hope it will give us a great opportunity to show what life is like behind the scenes of a modern day fire and rescue service, and to explode some dated myths.”

West Yorkshire Fire and Rescue Service has over 900 firefighters and is a close-knit community with a diverse range of personnel dedicated to serving the public – often in highly dangerous and life-threatening situations.   A specialist Urban Search and Rescue Dog called Jessie (pictured) and water rescue specialists are part of a team responding to an increasingly wide range of incidents.

The programme will also illustrate the camaraderie and team spirit of firefighters and how they support their communities in so many ways.

West Yorkshire Fire and Rescue Service serves some of England’s biggest cities including Leeds and Bradford and some of the North’s most beautiful countryside.

Mark Robinson, Executive Producer for Wise Owl Films said: “In 2020, being a firefighter is so much more than just about fighting fires. Today’s skilful and dedicated firefighters face a wider range of callouts than ever – from road traffic collisions to floods and water rescues.

“Using technology that wouldn’t have been available just a few years ago, we want to show viewers just what daily life is like for a West Yorkshire firefighter. They often come from the communities which they serve, and there is a ‘family spirit’ within each Watch which comes from putting absolute trust in each other on a daily basis”.

Aisling O’Connor, Head of TV Commissioning for England, said: “Being a firefighter is now so much more than fighting fires. We’re going to use the latest technology to show viewers exactly what it takes to be a firefighter today.

“The programme will put audiences right at the centre of emergencies and the work of the fire service with special helmet-mounted “firecams”, footage taken from fire engines and the control room. I can’t wait to see what unfolds.”

Firefighters (working title) will start filming in the lead up to bonfire night and will be shown in 2021.

The film crew will be clearly marked up as they follow firefighters attending emergency incidents across West Yorkshire at various locations and premises, including both private domestic and commercial.

In the event that you or your premises are filmed the film crew will be in touch to get consent to be featured in the programme.

The latest news, events, blogs and happenings at WYFRS.
Find out more